A contrarian take on leadership

Lets begin this article by clearly stating that this is not a treatise about the greatness of leadership. Nor am I always in the habit of treating leadership as some form of divine virtue! This is sure to surprise quite a few people, given our natural tendency to always view leadership as a positive attribute. But is it not an undeniable fact, that for every Gandhi, Churchill or Mandela in this World, you also have a Hitler, Idi Amin, Osama Bin Laden and dare I say a George Bush. All great leaders of people in their own right as well. But not necessarily impacting society in a positive way. Right?

So lets discuss leadership here as a purely functional, personality trait. That’s about it. A personality trait, which if applied in the right direction, can produce some wonderful results. But not always so.

If we accept this premise, we can then start to take a closer look at how leadership actually works. Its a fascinating topic, because at the end of the day, leadership is primarily to do with human needs and emotions. For that very reason, I would like to present a model structured around different kinds of leadership, that operate at various layers of a pyramid, drawing a rough parallel to Maslow’s hierarchy of needs.

Lets first begin with the fundamental construct of what forms a great leader. If one was to pick out a single, basic characteristic of great leaders, it would have to be that he or she has a deep and passionate conviction about some central belief or idea. And this belief needs to resonate with the “fears and aspirations” of a large section of people who would follow them. Clearly, most forms of political leadership is organized around this basic layer, simply because its the most energy efficient way of controlling large masses of people. From the very early days of humanity, people were driven by the fear of vulnerability to harm, and aspirations for a more comfortable life. Hence they banded together under a tribal leader or chieftain who could hold out the promise of safety and a better life. The amazing thing about this form of social leadership, is that just because their leader said so, people were willing to walk 1000’s of miles across frozen mountains and searing deserts. Simply based on their leaders conviction that across the next hill, lay a land of plenty and comfort. The interesting thing here, is that they were even more inclined to do so, especially if they deeply trusted him or her!

Please note that I am now introducing a new word here. “Trust”. My second proposition here is that a leader gains greatly in strength, when his followers trust him greatly. This is why after the first wave of Chieftains and Kings and Queens, the next wave of great leaders came from religion. As human beings, we have the driving need to trust in someone. Someone who would reward the good and punish the evil. In short, God! So it naturally followed that the priests who represented God on this earth, inherited the implicit trust of people and became great leaders. To this day we see that while political leadership tends to operate at the layer of fears and aspirations, religious leadership operates at the level of trust, and when that trust gets broken, leadership and power is often lost very rapidly in this layer.

I continue to draw a parallel between Maslow’s hierarchy of needs and leadership. At the bottom of the pyramid we have fears and aspirations. Then comes the need to trust. Thereafter you start getting into the self actualization zones. So lets come to the concept of “honor”. The need to feel pride in oneself, to gain respect and admiration from one’s peers. Many great leaders, especially those that work in the space of social activism, evolving to various forms of revolutionary and counter revolutionary leadership, have an ability to make their followers experience a strong sense of purpose and feel good about themselves in the process of doing so! “I fight in the trenches for you. I serve in the leper colony for you. You make me feel proud, you give me a place in society.” I follow you, irrespective of whether you are Che Guevara or Mother Teresa!

An interesting aside here, is how the layers continue to interact with each other. For e.g. when you take “trust” and mix it with the “honor” layer, it can result in an explosive and dangerous mix. Why else would you find 1000’s of young men willing to blow themselves up, based only on the word of one man? For no other reason but the fact that they trust him, and he fills them with a sense of pride and honor, however false that may be?

We could continue to build this pyramid in multiple layers, But in the interest of brevity, let me jump to the layer that I believe is today producing some of the greatest mass leaders in India today. You take a population that is disillusioned with political leaders, with wars, with religion, cynical about causes. You teach them to look deep inside themselves, into the spiritual core of their being. You help them wash away their sorrows and their sense of helplessness. And you appear to let them discover joy and happiness. And viola! You have the new age leader. The “spiritual guru” with an ability to inspire and lead millions of followers. This is how great leaders like the late Shri Sathya Sai Baba, Sri Sri Ravishankar, Baba Ramdev or Sadhguru Jaggi Vasudev, have each demonstrated an extraordinary ability to garner immense mass following from all strata of society. To the extent that they have now started challenging the traditional layers of leadership and shake its very foundations!

A very important point we need to make here, is not to assume that leadership at one level or layer operates only within that layer. Rather, each layer uses every layer beneath it, and builds something on top of the same. So while spiritual salvation may be at the pinnacle, the pyramid is built on the very same foundations. Aspiration for a happier life, trust that the guru can lead you there, a sense of purpose and pride in being an “evolved” human being, and finally, a road map to happiness! I would also like to propose that leadership of every form, at every layer, co-exists at all times in society. It’s absolutely not the case that one layer of leadership is an evolution from the other.

To conclude, what strikes me most about leadership, is how little it is about the “leader ” per se. And how much it is about his or her understanding and ability to map their followers. Quite simply, it appears that the greatest leaders are people who understand intricately, what makes their followers tick!

(* As presented to the LSE / FCO Chevening forum) 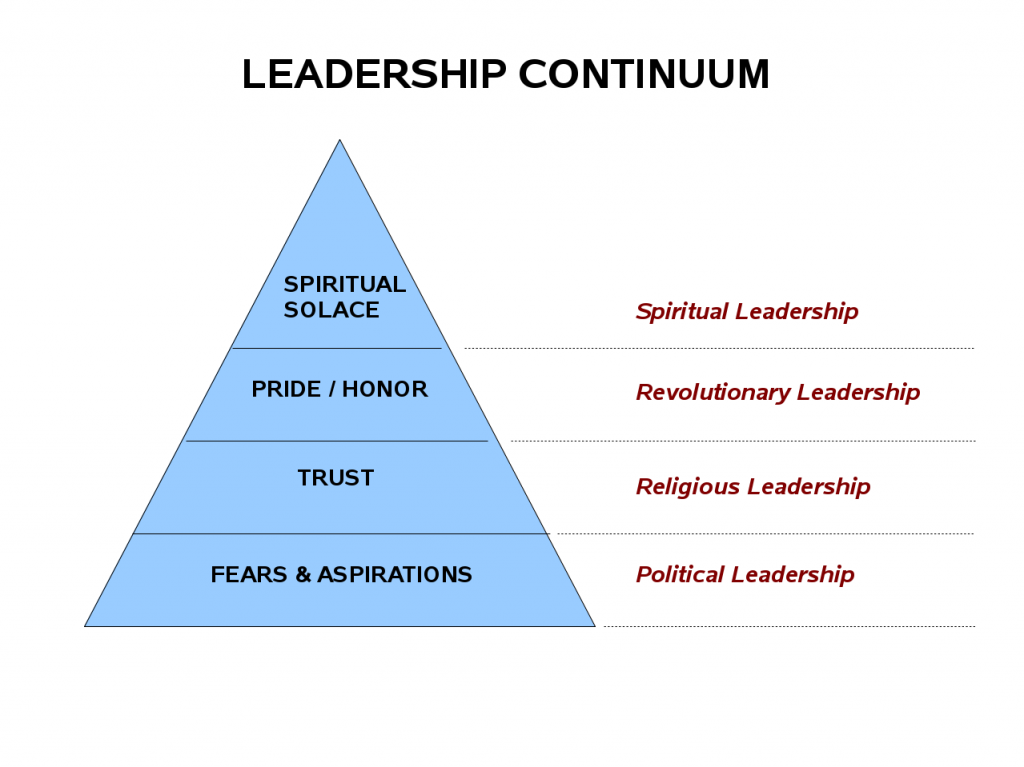