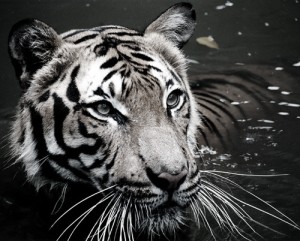 File photo of Tiger (Not T24) This file is licensed under the Creative Commons Attribution 2.0 Generic license

T24, or “Ustaad” as he is known by the locals in Ranthambore may never have imagined that he would be the centre of a transnational storm. One that threatens to expose the fault lines in Indian conservation circles which have been obvious to even the casual observer for a while now.

At one level, T24 only did what all Tigers do. He attacked and killed prey that was in his territory on the 8th of May, 2015. But the problem was that his victim in this case was human. He was a forest guard Rampal Saini, on beat duty in the park with two others. What made matters worse was that this was T24’s fourth human victim by official records. Though the numbers are disputed, there is no denying the fact that T24 is a bit of a repeat offender in anthropomorphic terms. But it is also true that a confirmed man eater would kill much more than 4 people over 5 years, especially when there is so much human presence in and around Ranthambore Tiger Reserve. So opinions became sharply divided on what to do with him.

In general, most wildlife experts (Valmik Thapar, Ullas Karanth etc. *see footnotes) seem to be of the opinion that one should love the individual, but not at the cost of the species. And this seems sensible when one thinks of the future of the species pragmatically. The support of local populations who adjoin the park is a critical need for wildlife. If an individual animal sets off increasingly severe man-animal conflict, then the resulting spate of poisoning, setting of fire to wildlife areas, abetment of poaching etc. turn out to be far more detrimental to the species than the removal of an individual. The forest department echoed this assessment and decided to remove T24 from the park before he did more harm. This was also supported by some local names who were active on social media. But they perhaps set off greater angst by publicly posting their opinions at a sensitive time.

The resulting political and ideological storm was severe to say the very least. Activists of every hue, from across the world expressed angst at executive orders being carried out with no confirmation or enquiry as to whether T24 was actually a man eater. The twitter and facebook worlds exploded with conspiracy theories and emotional outpourings for T24. Meanwhile the forest department acted with unusual speed and moved T24 into an enclosed zoo area before the movement could gain momentum. To the jilted activists, T24 now stood for everything that was wrong with our conservation system. Increasing tourism & pilgrim pressure crowding wildlife even in the tiny bits of land left for it. Money and political clout deciding access to wildlife areas, the prevailing babugiri and VIP culture at most national parks, arbitrary and ill thought decisions by forest departments, their tendency to bend before political pressure and attempts to pull wool over the public eye in matters of conservation. Examples of all of the above abound in the Indian landscape. It was almost as if T24 had opened the floodgates of frustration. This angst quickly spiralled out of control on online forums as they are wont to do, with abusive language, politicization and even threats flowing freely back and forth. Reports appeared in media across the world and the increasing public gaze forced many aspiring political leaders, especially at the local level, to join the fray and engage in dramatics that inflamed the matter further.

What is clear though is that most people involved in this debate are perhaps emotionally far too close to the problem or have a personal axe to grind. Here are some of the surrounding facts that seem to escape close consideration.

Given the above scenario, it is not entirely illogical that the forest department decided to simply remove the problem animal instead of risking further harm. However, the territorial nature of Tigers makes this decision even more complicated. T24 has fathered 2 cubs that are still in his home range. The moment he is gone, another male will inevitably stake his claim to the range and kill the cubs, so that the female comes into heat again quickly. This means a loss of not just 1 Tiger, but as many as 3 in the bargain!

Ultimately if one puts emotions aside, the logic of removing T24 cannot really be questioned. It was probably the only short term measure possible under the circumstances. However the challenge is that we have a culture of relying on quick fixes and then forgetting the larger picture. Unless the pressures on the park can be eased, unless people are restricted from walking into the park in droves, unless tourist traffic is restricted to the carrying capacity of the park and VIPs are asked to go elsewhere for their jollies, unless forest guards are adequately equipped, trained and paid, and unless the wildlife community learns how to pull together as one for the sake of the Tiger, this scenario is likely to repeat again. And therein lies the unfortunate truth!

This entry was posted in Current Affairs, General, Wildlife. Bookmark the permalink.
Logging In...