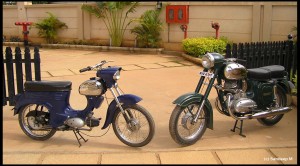 (Article that appeared in the DNA, Bangalore, dated July 4th, 2010)

My earliest memories of the Jawa motorcycle were wonderful, evocative stories woven by my father. About his bachelor days in Bangalore, spent at the YMCA on Nrupathunga road. A cosmopolitan world of ballroom dances, cantonment bungalows and secret trysts with the girls from St Martha’s across the road. The Jawa always played the lead role in his stories. “We knew how to party those days, my boy. No matter how many rums we had, the girls would be reached safely home and the bike would be parked on exactly the same spot. My bike used to drip oil on one particular place … and let me tell you, that spot never moved a millimeter in all the years I spent at YMCA!” We would drink up these stories with wide eyes, never doubting for a minute that the Jawa was the ultimate passport to young adult paradise.

So many years later, it was with a mixture of pride and affection that I called my father down to the basement to see my newly restored, mint condition 1964 Jawa. Forty years old, but looking like it had just rolled out of the showroom. He came down, walked around the bike, started it and nodded his approval. And then came up with the tip I’ll never forget. “Tell you what, get two cycle spokes and weld them at an angle to your crash bar. Then every time you take a turn in the night, you’ll leave a trail of sparks on the tarmac! Thats how we used to impress the girls those days”. I cracked up laughing… what an ingenious idea… why don’t people think of things like this any more? 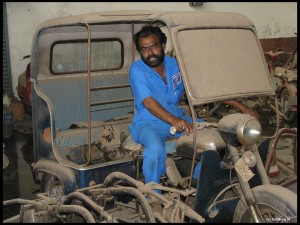 In my opinion, that story really captures the spirit that was Jawa. Young, carefree, having a good time and not being apologetic about it. Ridden by people who were more likely to ask “aye Rajan… how about a beer” rather than “how much mileage does your bike give??” From a time when Bangalore meant Jacaranda blooms and genteel spirit, rather than moral policing and senseless traffic. In a way I was witness to the demise of this era as well. “They are tearing down the Jawa factory! Tons of spares and some mint 350 twins up for grabs. Lets go!”, my Jawa crazy friend called me breathlessly. And so it came to be that we landed up to witness the last hours of the Ideal Jawa factory at Mysore. It had been under bank control for decades, and was finally being auctioned off and razed to the ground. As we wandered through the dusty assembly lines, and marveled at the rare spares, performance parts and prototypes that were lying around, we even came across an autorickshaw, a hang glider, Go karts, Cezeta scooters and drag bikes, all built around the simple and sturdy Jawa engines of the day.

The Ideal Jawa factory at Mysore was setup in 1960, to manufacture motorcycles for the Indian market under license from the Czech parent. When the agreement period to use the brand name “Jawa” ended, they shifted to the use of the brand name “Yezdi”, which has an interesting story behind it as well. “Jezdi” (with a “y” twang on j) was the term commonly used by the Czechoslovak engineers, who would do the final test for the bikes, before it rolled off the assembly line. After doing all the tests, they would often say “Jezdi” which means “It runs ”. And so the brand “Yezdi” was born 🙂
So much potential, so much history… an entire way of life… all scrapped and razed to the ground, save for the few nuggets that enthusiasts could buy and preserve for posterity.

Luckily Jawa aficionados across the country have now come together, thanks to technology and online communities. There is a resurgence in pride of ownership, and sparkling restorations are returning to admiring glances from die hard Jawa fanatics. One of the cornerstones is the celebration of the “International Jawa Day” on July 11th every year. A date for the ageless beauties to be rolled out of garages, cans of polish to come out, and every spoke to be lovingly cleaned before being presented to a discerning audience. The group, when it finally meets, is eclectic and egalitarian, unlike other “elite” biking events. At any Jawa meet, one is likely to run into the neighborhood mechanic from Shivajinagar, hunching in his art leather jacket while jealously guarding his lovely “old tank” Jawa. And one is equally likely to meet the geeky techie, just back from SFO and fiddling with the steering dampener on his race prepped Jawa 350, twin cylinder. While the Roadking owners from Lingarajpuram look on in disdain. The Mysoreans, of course are a special breed. Most of them are firmly convinced that they invented the Jawa, Czechoslovakia be damned. Never a dull face in the crowd. The organizers do a lot of hard work, segregating models and organizing the day ride. All in all, its great fun. So mosey over to Kanteerava stadium on the 11th if you wish to participate, or just look over the gleaming beauties. 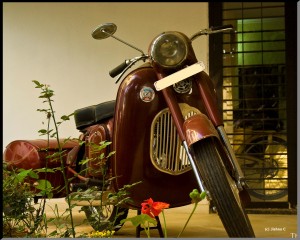 Why this madness for an old bike? I guess thats a question that can only be answered by a “biker”. People often ask me what separates bikers from commuters. I must admit its a difficult distinction to make. Who is to say that the man riding to work on his 70 Kmpl wonder is not a biker at heart as well? My personal opinion is that its not about the bike. It’s all about the stories. If your bike merges with your personality and often produces anecdotes like “dude, remember the time your left fork broke at Kunzum La?” or “This cop took one look at my Jawa, and started asking me where I got the pointy levers from, man” .. then you’re a biker… no matter what you ride! Of course, if you ride a Jawa, the World will instantly know that you are a gentleman of impeccable taste. But there are other ways of conveying that as well. You could always buy a Rolex, or wear Zegna to work!

This entry was posted in Two wheels and an open road. Bookmark the permalink.
Logging In...