“Wanna go on a dirt biking trip across Cambodia?” the question came piercing through my sleep befuddled brain. “Err, don’t they have landmines there?” was my first response.  It was just a rhetorical question, of course. Even before I asked it, I knew that there was no way I was passing up a chance like this. So I found myself among 7 riders from Bangalore, landing in Cambodia in mid April, helmets and riding gear in tow. Little did we know what an adventure was in store for us! This was no ordinary motorcycle expedition. This trip was going to be totally off the tarmac. Cutting across fields and river beds. Huddling inside thatched huts from the pouring rain. Drinking odd coloured liquids and eating even more odd looking experiments.  Seeing and experiencing the land and its people like they really were. Our organizers were Indimotard, die hard bikers, buddies and fellow adventurers. All the juicy, insanely fun trails they had GPS mapped across Cambodia were to be our ticket to a great adventure over the next 8 days.

Cambodia felt pleasant and friendly as soon as we landed. We felt at home in Phnom Penh right away. The same chaotic traffic, the same corruption and even more disparity in wealth than what we are used to seeing. It seems like Cambodia either lives in palatial houses with barbed wire fences and spanking new SUVs.  Or it lives in a shanty and drives a motoscooter or a “Tuk Tuk”. The big difference though, is that despite all its problems, the people seemed to be happy and friendly in general. Perhaps the philosophy of being a largely Buddhist nation, overcomes the frustration that usually creeps into such societies!

Our very first task was to choose our steeds from the local supplier. And this was nothing short of a virtual swayamvara. Bikes were discarded because they just “didn’t feel right”, “no chemistry” and various such technical reasons, till each of us were kitted out with fantastic offroad Honda XR250’s or Baja250’s. These were the jeeps of the bike world. Riding high on 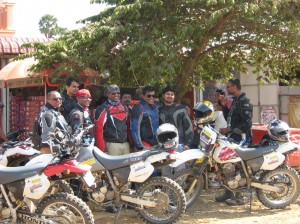 tall suspensions that could soak up the worst of terrain, and fitted with bullet proof engines that made up for their small size with a large heart! Perfect for the kind of terrain we were soon to encounter!

Our plan was to exit the cities, and almost immediately take off from the main road and leave behind the tarmac. From there on, we would cut across dirt trails, jungles, villages and fields till we joined back with the tarmac, close to our destination. We had never imagined it would be like this. Suddenly we found ourselves skidding along mud and gravel at high speeds, legs stuck out near our front wheels while careening through slopes and jumping across culverts and pits that would appear from nowhere. Once we got the hang of it, we had a blast all the way through! The best part of the trip was that after hours of riding through dust and sweat, we almost always landed up at one of the quaint villa style boutique hotels dotted across Cambodia. They have impeccable service and are decorated with a great sense of style. Perfect places to rest your tired bones after a day of hard riding!

Our first destination was the lovely seaside town of Kep. As we swept into the seaside promenade, we were taken aback by the beauty of the entire area. Imagine a beach ringed with French colonial villas, bougainvillea and flowering frangipani trees, with lovely sculptures peeping out from the bushes.  To add to this, the Kep lodge that we were staying at had a lovely pool overlooking the mountains. In between exploring the seaside trails and a trying our hand at sand riding along the beach, we stopped for lunch. And what a lunch it was! Fresh crabs, prawns and squid coming right off the sea and onto our plates. Whipped up with lemongrass, peanuts and coconut milk tempered with Kampot pepper into mouth watering dishes that we seemed to eat forever, washed down by copious amounts of Angkor beer. After this, we were obviously in no shape to do any serious trail riding. So our host came up with the inspired plan of going in search of the “secret pool” that was rumoured to be hidden in the hills nearby. 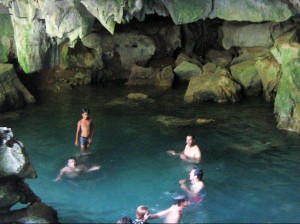 Our trusty GPS maps led us to the perfect spot. With the help of some village kids, we clambered down a narrow cave to emerge into a magical cavern, lit by sunlight filtering in through the roof and enclosing a cool, limestone green pool of perfect 6 feet depth. In seconds our clothes were flung off and we were soaking in the magic without a care in the world, as the kids entertained us with back flips and acrobatic dives from the adjoining rock.

Our idyllic sojourn was not to last long however. We were soon on the road again, and our first stop was a small town restaurant, renowned for serving up some bizarre fare! This was our opportunity to try crispy fried locusts, deep fried tarantula spiders and various such delicacies. I must say they didn’t taste bad at all, once you get over the mental block of putting a creepy crawly into your mouth. The locusts tasted crunchy and spicy, while the tarantula was not very different from mildly flavoured seafood. 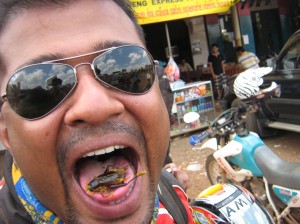 After this brief interlude, we visited the infamous “killing fields” of Pol Pot, which was a sobering experience to say the least.  It’s almost unimaginable that such a mild race of people could do something so crazed to themselves. Millions were executed in the space of a few years and the bones, skulls and bizarre stories bear testimony to man’s supreme cruelty. Suddenly it struck us that all along our way we had been passing signboards which indicated the areas as either cleared or uncleared of minefields. And there were people still losing life and limb in Cambodia, as a result of their deadly past!

Our next destination was the historic city of Siem Reap, of Angkor Wat fame. All the locals seemed to be far more excited about its night life rather than the ancient ruins. And we soon discovered why. Siem Reap is hip and happening. Head out to Pub Street on almost any night of the week and you can find a huge street party happening there. There are great bars like “Angkor What” and “Red Piano” lining the streets, while the discotheques are pulsing with life right into the early mornings. And for the more historically inclined, the ruins surrounding Seam Reap are obviously world renowned. The most famous are the sites such as Angkor Wat, Angkor Thom and Ta Prohm. But to say the truth, we were left quite cold by these tourist traps because of the huge crowds, and the fact that south Indians are jaded by ancient temples anyway. Of course, one does feel a twinge of pride that this entire empire was once an extension of ruling dynasties that expanded out of India. The indelible mark they left on the region’s culture, the Hindu mythology and symbolism perhaps rivals what we can now find even in India itself. However, we were really in search of the “tomb raider” experience, and we found exactly that at a small, remote ruin in the midst of a jungle. We landed at Beng Maleah in the evening, and found a brooding place filled with crumbling temples locked in mortal combat with trees and creepers growing out of every possible crevice. 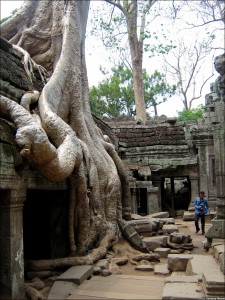 As usual we found a couple of local lads, who were eager to show us how to climb through the secret passages in the ruins. We were soon scrambling around in the fading light, climbing over giant creepers and looking over our shoulders nervously every now and then for no logical reason at all.

One thing that really struck us on our trip, was that Khmer culture is so relaxed and easy going. No one is in a hurry. No one is trying to harass or judge you. It’s ok to be having a good time, and even those who can’t afford the same things, smile and do their own thing instead of getting frustrated. Perhaps it’s the result of the terrible tragedies they have had to suffer, but there is surely a lot that we can learn from the Khmers, on how to be happy.

These philosophical thoughts swirled around our heads as we started our last leg back to Phnom Penh. But there was still a surprise in store for us! The Cambodian water festival coincides with their new year on April 14th, Just like many states in India. And everyone is fair game to be drenched with buckets of water. Given how hot the weather was, we were soon slowing down to get our share. And the shrieking crowds loved obliging us. We shook so many hands and felt so much at home in that moment, that the thought of leaving almost seemed alien! But it was soon time to bid goodbye to our reliable steeds and this wonderful country shortly thereafter. We were sure though, that we would be back sooner or later. 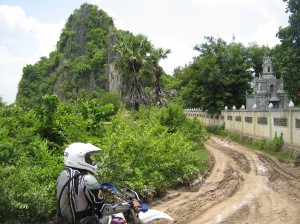 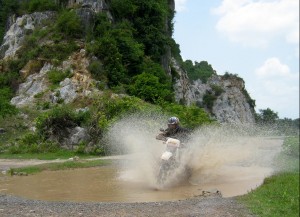 ———–  For more information on the Tomb Raider adventure, go to www.indimotard.com