If the monster is gone, how come everyone’s still sweating?

The financial crisis is a distant memory, and happy days are here again. Uncle Obama and the RBI have saved our souls and we’ll never have to face those dark days again.. right? 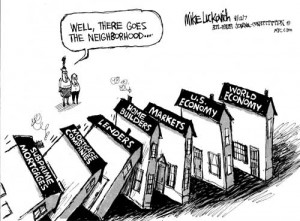 Errrr… maybe !!! But then why is every economist and fund manager worth his salt displaying signs of extreme nervous anxiety? Is everything really as hunky dory as we are made to believe? Or is the average man on the street being led up the garden path? All over again?

I guess nobody really knows. But before you rush out and buy that new flat or expensive car for which you’ll have to pledge your soul for a few years, it may be smart to try and understand why many people who matter are still wiping the sweat off their brows.

In order to understand this, we’ll need to resort to a new pop lexicon, consisting of words such as stimulus, deficit spending, liquidity, forex reserves, state controlled currency etc.

Lets start with “stimulus”. Perhaps you’re wondering whether this has anything to do with adult book stores or electric wires and mild shock therapy. But its actually just a very simple idea. For an economy to flourish, people have to spend a lot of money. This spurs demand, which spurs production, which spurs salaries.. so on and so forth. Thus creating a virtuous cycle (opposite of vicious cycle?)

The unfortunate part though, is that when you rap a consumer very sharply across the knuckles, the ungrateful sod then refuses to reach for the cookie jar. And the economy comes to a shuddering halt. So now the government steps in and starts spending money through its various tentacles. And at the same time, it reduces the cost of money (i.e loan and deposit interest rates), so that there is more liquid cash easily available in the market. In theory, govt spends until consumer confidence returns, and things return to their natural order. Then the govt slowly withdraws. Smooth and easy.

The problem with this strategy is that most governments don’t have the extra cash to spend in the first place. So they are faced with two choices. Either spend more than your earnings in a financial year, thus creating a negative balance called the “deficit”. Or print more money and distribute it like Sata Claus. Problem solved? Unfortunately.. NO. In the unforgiving world of macro economics, there is always cause and effect. If you keep spending more than you earn, your run the risk of essentially going bankrupt as a country. One day you cant meet your balance of payments, you default on sovereign loans and guarantees, import costs, short term debt payments. And things go boom!

On the other hand, if you simply print more money, Forex markets take note. And you end up devaluing your own currency to the extent that printing more of it becomes pointless at some stage.

Take the example of the United states. They have tried all 3 tactics. The deficit in Obama’s budget proposed last Monday was 1.6 Trillion $!! Which continues to make the US one of the most indebtedcountries in the world, with a projected national debt of 14.3 Trillion $ by this month . Make no mistake. The wealthiest nation sure owes a lot of money to the rest of the World. Second, various forms of central bank controlled interest rates are almost down to zero in the US. In effect, if you deposit money in a bank instead of spending it, you’ll earn almost nothing. On the other hand, if you want to borrow and spend… please do so. It costs you almost nothing again. So maximum liquidity has been pushed through. Lastly, they started printing money, which resulted in the dollar weakening sharply, as many of you may have noticed a few months ago. They had to hit the brakes real fast, as what happens when the World’s reserve currency weakens is long article in itself. Suffice to say its a pretty grim outcome. So that didn’t work so well either.

In retrospect, its always a balancing game. And every government has to take variations of the same steps and hope for the best. The joker in the pack though, ends up being … China!! Surprise, surprise 🙂

Think of a football game. Everyone is playing by the rules. Enter a new player, who is determined to win. And decides to do so by playing to a completely different set of convenient rules. Thats China in many ways 🙂

So what does China do? They obviously do a damn good job of generating a trade surplus and FDI. And they also go ahead and print a lot of money. But the key difference here is that no one really knows how much. And what do they use all the cash for? To buy up US dollars! What a stroke of genius. China now has in excess of 1 Trillion US$ in forex reserves. Estimated to be the largest single pool of US$ in the World! Now even if the Yuan depreciates at some stage and the Dollar strengthens, China doesn’t care. Because it holds all its reserves in USD anyway!! Capish?

Today it is estimated that China is adding about 30 M$ of reserves every hour, while the US is adding 80 M$ of debt every hour. So is the writing on the wall? Wellll…Yes and no 🙂

No one really knows what the effect of holding so much cash reserves and artificially manipulating the value of the Yuan is going to do to the Chinese economy. The banks cant just sit on the money. They’ll have to lend. And its bound to be cheap, indiscriminate lending. This can, and is already leading to huge rise in real estate and other asset prices in China, which then become new bubbles, waiting to burst.

On the other hand, the US cant pauper itself any more, and will start withdrawing the “stimulus” some time in the near future. With the level of joblessness etc still prevalent, the economy does not look like it can take care of itself even now. Back to square one?

Asset bubbles in China burst + US economy slows down again = recipe for disaster?

No one really knows. Thats the scary part. Maybe this is all just a doomsday prophecy. Maybe not. But I would keep some gold under the mattress, if I was you 🙂

Check out this interesting video on a related topic
(warning… it’s 1 hr long and pretty one sided. But interesting neverthless 🙂
This entry was posted in Current Affairs, Economy and tagged Economy. Bookmark the permalink.
Logging In...