Make way for the anshan activist! 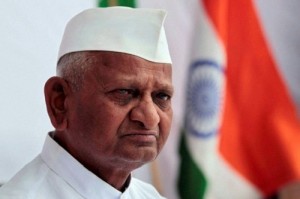 Before one or the other group starts to raise its hackles, lets me state right upfront that I am not planning to comment on the relative merits of the Lokpal or Janlokpal bill :)! You may ask why?

a. I think far too much has been said about it anyway. And no one’s really “listening”.

b. I am really quite confused. On the one hand, the entire movement appears dangerously right wing, bordering on anarchy, irrespective of whether the objectives are noble or not. On the other hand, this is a bill that has been pending with our elected representatives for 47 years. They clearly don’t intend to do anything serious, because it would be self defeating for them. At least Anna’s strong arm tactics have finally pushed them into a corner where they have to take visible action.

Having stated that I am confused, let me first congratulate “team Anna”. And then I would like to make a humble suggestion as well.

We need to congratulate team Anna for finally having kicked the Indian middle class out of its cynical slumber. And for its great media management. It appears the famously apathetic Indian middle class has finally discovered the value of organizing, mobilizing and activism. This could well be a defining moment in Indian history. Will this be a fad? Will it last for some time, till the guys in dockers shorts feel tired. And then fade away like the fashion of the season? We don’t know. But something tells me that having tasted the power of activism, the middle class as a constituent segment of society is unlikely to let go now. And India was waiting for this moment when the middle class would finally stand up and start asserting itself. No lasting change is possible in this country, as long as this section decides not to play. Plus when other sections see that even the lazy middle class is coming onto the streets, the movement tends to swell and encompass larger and larger sections of society, as is already evident now.

However, I cant resist seeing the humorous side of this movement as well. Some of the amusing developments around the movement, actually signal that team Anna has latched on to something big. First the descent of the Ramdevs, Sri Sri’s and Jaggi’s of the World into this movement. Clearly, there are a lot of aspirants to the post of messiah to the middle classes in India today. Over the last decade or so, spiritual leaders of various forms have offered solace to a disillusioned middle class, who have found themselves orphaned in a changing India. And built massive empires out of milking this simple middle class insecurity. Its almost funny to see them get worried that if they don’t make themselves visible with this movement, their very empires may be under risk. Then there is the even funnier sight of the classic “victim” communities such as caste groups and left leaning groups of various hues, crying hoarse that that “team anna” is not inclusive. Its almost as if they resent their victimhood being taken over by a better player who will grab all the attention, and they cannot be prima donna victims any more! To top it all is the appalling level of knowledge displayed by some of the protesting men and women, as to what they are fighting for. Almost everyone accepts that they have read neither the Govt bill nor the Jan Lokpal bill. Many of them can only say “Anna ji, hum aapke saath hain” “Vande Mataram” “Baharat mata ki Jai” etc. But when quizzed, they come up with issues that have no relation to the Lokpal bill, and are often issues that are personal and relatively petty in nature. The funniest moment was when I was passing a group of protesters last evening, lustily yelling “vote for Anna”. Apparently they had not heard of Anna’s aversion to elected posts and politics in general. Or perhaps they were hoping to coax him along through the sheer exercise of their vocal chords!

Before I ramble too much, let me come to my suggestion. Forget the Lokpal bill. There is no dearth of good laws and monitoring institutions in India. What we need is accountability and a place where people can turn to, when they are harassed by those small daily doses of corruption. Whether in the government, at the workplace, in schools, localities or corporations. Yes, this is a fact. It is not “they” who are corrupt. It is “we” who are corrupt. The average Indian today, whether he is a policeman, a procurement guy in an MNC, a senior executive releasing an order or a principal granting admission, believes that discretionary power exists to be abused for gain. All that the “India Against Corruption” movement has to do, is to enlist members who first take an oath never to pay a bribe themselves. And then promise them that if they face harassment of any sort, they can come back to this newly “awakened” middle class community, who will picket that local office or corrupt individual and agitate till he capitulates, and action is taken against him /her by the system. A few repeats of this, and just the mere threat that I will go to “IAC” will bring our cowardly corrupt to their knees. As more and more people see that they have the power to fight corruption and they are not alone, the movement is bound to spread wide and deep, and we may witness a real change in national character. Which is also bound to trickle upwards.

So please, go out and form your local committees, self help groups, by locality, by area. Set up help lines, give out id cards. Educate people on what they can do to avoid corruption. Be ready to rush to an individuals help at the drop of a hat. Educate Indians on what their rights are, and what are the institutions that they have recourse to. Have lawyers available to fight for people who are being unfairly targeted. Brainstorm on how to improve processes to reduce corruption and send the suggestions to the media and government bodies that still care. There is a ton of work to do at the grassroots level, that can make a huge difference to this country. But its a hard long haul.

If that’s too much work, then yes you can hold a candle at Ramleela maidan and hope that one more bill will solve everything. Meanwhile, the Baba’s of the world can play out antics like escaping in ladies clothes (because Krishna did so?? Lol :)) or Anna can lose another 5 kgs and get “his” Lokpal bill passed. But corruption may remain an endemic part of our society!

How to run a media strategy –

Saint for a new age?