A friend asked me to explain what the Dubai crisis was all about… in the language of “normal people”… and how it affects us… so took a stab at it 🙂
Of course.. I’m no expert.. so there may be errors in my understanding.. but I think the gist of it is correct.. 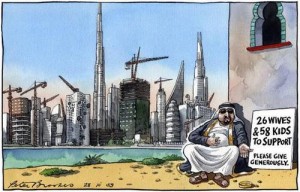 Essentially, Dubai is a small emirate, which actually does not have much oil. But it established itself as a sort of free trade zone in the midst of oil rich nations, and promoted a liberal and westernized atmosphere, thus becoming a sort of gateway to the middle east. In reality, its a tiny city state, which was always controlled by a few sheikhs, from one family.

The sheikhs control all business in Dubai. There is no customs duty, no income tax, no corporate tax etc… But nobody can own a totally private or foriegn business. Every business has to be a joint venture, and only an “emirati” can be the local shareholder. So businesses stream into Dubai, everyone makes lots of money by trading with the region, and part of the profits are shared with the sheikhs. An entire country, set up to fuel profits to a few royal families. And just like any cash cow, they use part of their profits to build a glitzy city, thus attracting more investors and businesses over time.

So far, so good. But there is a concept called “cheap money” in economics. This essentially means a lot of liquid cash floating around in a sector, which sends prices soaring to unrealistic levels, and creates a bubble which is unsustainable. This typically happens to real estate and equity most often.

Because the royal family was funneling so much money into real estate in Dubai, prices skyrocketed in a short few decades. And now the complexity starts. The same family now sets up Real Estate front companies like “Dubai World”. These companies start trading in real estate, which they are pushing up at the same time. As the stakes get higher, the shiekhs realize they don’t even need to put their own money in. A long line of European and US banks are queuing up to lend them money. And in return they issue a “sovereign guarantee”. This guarantee is issued only by countries, rather than individuals. And its considered totally safe. Its like USA issuing a guarantee that come what may, they are responsible for repaying a certain debt.

Pretty soon the loans are in Billions of dollars…. No one asks if this money actually exists in the Dubai economy. And one day, the bubble bursts across the world… The global economy tanks… And with it, the Dubai real estate market also crashes, because it was not real in the first place.

The banks now try to invoke the sovereign guarantee… But surprise, surprise. The shiekhs are not going to pay billions from their pockets. They have moved their personal fortunes out to god knows where… And simply declare the country bankrupt and unable to pay.

Ripple effect… Banks with large outstandings start to crash in europe…. The global economy just starting to limp along, gets a nice kick in the nuts once again. Someone screams recession! Once again, 10 US MNC’s cut 5000 jobs, some Indian IT proffs lose jobs. Fear sets in, they start hoarding money and stop spending. This causes the India stock market to crash, taking real estate deeper into the mess, and you and I are down in the dumps once again.

That’s how it affects us. Ghar ghar ki kahani 😉

This entry was posted in Current Affairs, Economy and tagged Dubai, Economy. Bookmark the permalink.
Logging In...