You only protect what you love

(my article regarding the ban on wildlife tourism, which appeared in the DNA newspaper, dated 21st Oct 2012) 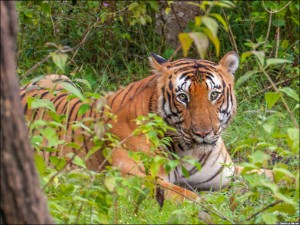 Much has been made of the recent Supreme Court ruling, temporarily banning tourism since the 24th of July, within tiger reserves that failed to delineate their core and tourism zones. The entire conservation and wildlife community has been split on the issue, and debates have ranged from technical and scientific, to emotional and angry. Clearly this was not a simple issue of wildlife versus commercial interests, and there were some logical reasons and very good data placed in front of the honourable court, which caused them to reconsider the issue and lift the ban from the 20th of Oct, albeit with conditions.

Given how much debate has ranged around the scientific evidence and economic importance of tiger tourism etc, I don’t intend to delve into the same now. Yes, there is enough data to suggest that curbing tourism does not necessarily have a direct correlation with improving wildlife habitats. There is also proof of rampant misuse of forest land and crass commercialization of some of our wildlife zones. But these are all issues that are being debated threadbare in any case.

I am rather concerned with the social aspect of the equation. The question that should bother us now, is how we intend to deal with people, so that they may behave responsibly and compassionately with the wildlife heritage of our country. One could say that it is somewhat counter intuitive to be talking of people, when the issue at hand is that of wildlife. But let’s accept for a fact that this is a crowded country of a billion people.  Our wildlife does not exist in isolation. It forms a vital part of the mosaic that makes up this nation. And unless the larger mass of people is willing to co-opt our wildlife into their social fabric, no amount of policy or policing is likely to save our wildlife in the long run.  Let’s first accept that people, and moulding their attitude towards wildlife is crucial to conservation.

In this context, I am concerned with a trend in our country to impose consequences on the larger mass of people, for the failures of their institutions of governance. Quite simply, if we cannot manage to regulate the carrying capacity for tourism in wildlife zones, if zoning regulations are being flouted with impunity, if we cannot educate tourists on how to behave in proximity to wildlife, then the solution cannot be to just cut off access to all tourists. The key question of why the regulatory mechanisms are not working, why the NGO’s cannot improve the sensitivity of visitors etc. are worth asking. This is in the same vein as saying that if we cannot prevent crimes from moving cars against women in one city, let’s disallow sun film on cars across the country. Or if we cannot control drunken driving, then let’s shut down all nightlife and so on. In the context of the tiger tourism ban, while one understands that the idea was to build pressure on the system to define zones, one also wonders whether alienation of tourists is really the best way to do it?

The second, more worrying aspect is the rising trend of elitism among wildlife enthusiasts and within conservation circles. In a subconscious throwback to the days of casteism, we seem to have a tendency to form closed communities whose aim is to garner scarce resources for themselves and cut off access for others. And our wild areas are a truly scarce resource today. So we have a situation today where the forest department largely believes that their job is prevent anyone from experiencing the jungle, however honourable their intentions may be. Conservation experts are banal enough to suggest that only they be granted access to the forest for research purposes. Wildlife enthusiasts curse the presence of every other jeep except the one they are in, and nature photographers jealously guard the location of any rare species. All these communities seem to think that only they are engaged in the important task of saving the planet, while everybody else is a hindrance! I have myself been guilty of the tendency to look down upon noisy tourists who come from less informed backgrounds. “I wish they would just go away”, is that the thought that naturally springs to mind. But no one seems to understand that these people have also travelled and they are here because they love the feeling of being in the jungle as well. They have as much right to be there as the next person and they represent a potent force. What really needs to be done is to educate, sensitize and harness their energy in favour of wildlife. Instead we tend to swing between allowing rampant misbehaviour and cutting off access completely.  Neither extreme really adds value to wildlife.

Fact remains, that we are a democracy. And in a democracy, people matter. Their opinions count and issues that are top of mind for the masses get top priority from the government as well.  If we cut people off from the forests, conservation will remain an elitist dream, discussed in the drawing rooms of Delhi and treated as a “good to have” by the government. It is simplistic to believe that we can create a well managed sea of efficiency inside our national parks, if nobody around cares for what is going on in there. On the other hand, if we can get more and more people to experience the beauty of nature responsibly, and if we can generate enough good will for wildlife that turns into a mass movement, then it will be almost impossible for the government of the day to barter away large tracts of pristine forest for mining, cut highways through important migration corridors and submerge hundreds of hectares of prime jungle in the name of development. After all, these are the threats that represent the real danger to our wildlife heritage. Not the hapless tourist who dips into his pocket, and pays to keep our sanctuaries running! One can only hope that the court considers this while hearing the petition again on the 30th of Nov.